Training firefighters from Afghanistan tour I 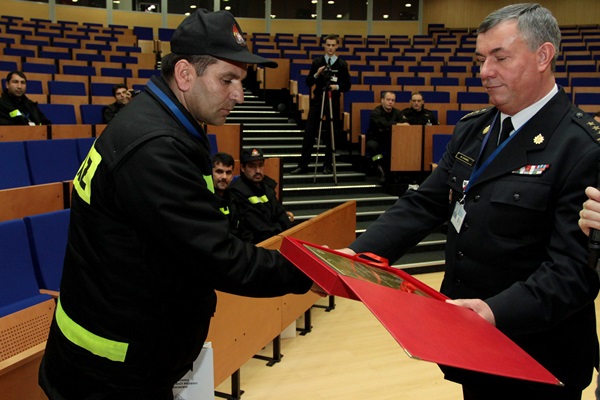 From 3 to 16 December 2012 . held a " Basic training in tactics and rescue - fire fighting and prevention " for the firefighters of the Islamic Republic of Afghanistan .

The Central School of the State Fire Service in Czestochowa, led by the Commander Brigadier st . MSc. Mark Chmiel has consistently pursued close cooperation with foreign firefighters from many countries, including from Moldova , Ukraine, Georgia , Belarus, England, Scotland , Ireland, Germany , the Czech Republic and Slovakia. With such a joint exchange of experience steadily raised the standard of training is carried out in Czestochowa school .

Training for our guests from Afghanistan at the Central School in Czestochowa PSP was implemented within the framework of the project: POLAND AID in 2012 and is one component of a multi-annual development cooperation program for the period 2012-2015 of the Ministry of Foreign Affairs and the Ministry of Internal Affairs .

The language barrier and cultural was not able to prevent rescuers from Polish and Afghanistan in the exchange of experience, implementation of joint exercises , as well as making new friends. Once again, we found that rescue knows no bounds.

Our guests from Afghanistan were very impressed with what equipment has Polish Fire Brigade, as comprehensively educated are our rescuers , and what training base has Central School .

The highlight of the training was a joint exercise Polish and Afghan firefighters. The harsh winter weather conditions were realized two assumptions :

- Collision of a passenger car with a burning rail tanker .

Interaction rescuers should be well evaluated and lessons learned are invaluable material for the implementation of further international training .

The project rescuers have been trained in the field : the organization of fire protection in Poland , tasks and functioning of the National Firefighting and Rescue System , a qualified first aid , fire safety of buildings , equipment, respiratory protection equipment and fittings water - foam , fire extinguishing tactics internal emergency equipment hydraulic and pneumatic .

They met in addition functioning of the National Rescue - Firefighting in Poland , which is one of the most internationally recognized .

The selection of subjects was determined on the basis of common agreement between the Parties . Classes were conducted on the military school by CS PSP staff and external experts in modern classrooms and laboratories and practical laboratories.

- Training of health and safety ,

- Tasks and functioning of the National System Rescue and Fire Fighting ,

- Tasks of the State Fire Service ,

- Extensions of fighting with hardware and fittings water and foam - flash-over chamber ,

- Presentation of the operation of the fire and rescue units and the Emergency Response Centre for the example of the Municipal Headquarters PSP in Czestochowa.

The project was implemented at the Central School PSP, will increase the competence of public services in Afghanistan , and thus will improve the efficiency of tasks , improving safety and the environment.

The " Polish Aid 2012" , which the Central School of PSP performs with the Ministry of Foreign Affairs and the Ministry of Home Affairs, is not just training . It is also hardware support . Rescuers from Afghanistan will receive the following technical equipment :

- A set of high and low air pressure

- A set of hydraulic rescue road

Many thanks to Mr. President of Czestochowa Krzysztof Matyjaszczykowi and Ms. Barbara Mizerze - Director of Social Welfare Centre in Częstochowa , through which passed dozens of stuffed animals , toys, games , and a new , warm clothes for the Afghans.

The training was attended by honorable guests include :

- Mr. Salim Zabardast - Consul of the Islamic Republic of Afghanistan to Poland ,

- Mr. Major . Hamdullah Sohrabi - the head of a group of firefighters from the Islamic Republic of Afghanistan ,

- Mr. Brig. were buried in st . Theophilus Jankowski - former Commander in Chief of the PSP and PSP Commander of the Central School ,

- Mr. Senior Brigadier . Stanislaw Sulenta - Advisor to the Chief of the PSP ,