Training firefighters from Ukraine round II 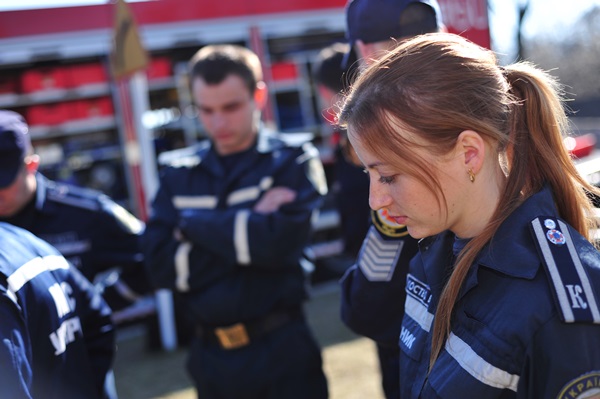 From 8 to 19 April 2013. Central School PSP implemented training for 20 representatives of the Fire Department of Ukraine headed by :

• Colonel Anatoli Poliushkevyczem - Commander of the Main Board of the Civil Defense in Rivne Oblast ,

The training at the Central School in Czestochowa PSP was implemented under the project : " The principles of organization decontamination total resulting from chemical hazards - Ecological mass incidents " and was one of the elements of a multi-annual program of development cooperation for the years 2012 - 2015 Ministry of Foreign Affairs and the Ministry of Internal Affairs .

The project rescuers from Ukraine were trained in the recognition and elimination of hazards in the chemical and ecological rescue . The selection of subjects was determined on the basis of mutual agreement . Classes were conducted on the military school in modern classrooms and laboratories for practical and laboratory staff CS PSP. Joint exercises of our guests from Ukraine with the cast of the school and Rescue Units - Fire Fighting been a great field to exchange experiences, and also offer an opportunity for comparison of emergency procedures in both countries .

Training carried out at the Central School PSP, contributed to the increase in the competence of the public service of Ukraine, and thus made ​​it possible to increase the efficiency of its activities, improve security and the environment.

During the ceremony at the end of training Commandant of the Central School of the State Fire Service in Czestochowa City of Brig. MSc. Marek Chmiel , along with Colonel Roman Ratusznym - vice-rector of the Lviv University Safety of Life have signed letters of intent for further training and exchanges of cadets of Czestochowa and the Lvov school of the fire .

• Use of medical equipment fire and rescue operations ,

• Tactics in chemical rescue . The security environment after the end of ,

• Alerting , warning and evacuation of the events that relate to spreading a toxic cloud ,

• Rules for the selection and preparation of lifeguards for rescue operations in chemical ecology. Exercise in the smoke chamber ,

• Legal basis of the chemical and environmental rescue in Poland

• Chemical hazards during mass events - sources , causes and consequences of their occurrence , the impact of hazardous chemicals on living organisms and the environment,

• Organization of a specialized group of chemical rescue

• Organization of the pre- decontamination in the National Firefighting and Rescue ,

• Construction of a set of final decontamination tents ,

• The crisis management system in Poland

The project " Polish Aid 2012 - 2015 ", which implements the Central School of PSP with the help of the Ministry of Foreign Affairs and the Ministry of Home Affairs, is not just training . It is also hardware support . Rescuers from Ukraine to return to their country with the likes of :

As part of the cultural program prepared trip and tour of Krakow.

" When our teachers teach you practical skills presented on the principles of modern chemical and environmental rescue .

From the perspective of these ten days of training reassured myself that what we do has a profound meaning. I met many interesting people. There was an exchange of views and experiences , as well as new ideas emerged to organize another interesting training.

The unique atmosphere that prevailed during each day, the warmth of all parties made ​​willingly and joyfully take up new tasks in the framework of the Eastern Partnership . "

It is worth emphasizing special lecture on the Chernobyl disaster , which took place on 17 April 2013. at the Central School of the State Fire Service in Czestochowa. It was made possible thanks to our special guest from Ukraine - Mr. Colonel Anatolii Poliushkevych that after the Chernobyl disaster for 100 days took part in the rescue operation. Within a radius of 30 km from the damaged reactor has been designated a special security zone , where our guest along with other rescuers , he was a dangerous service of taking care of securing the area and rescue what was still possible.

Anatolia Poliushkevych is the author of several articles in the national magazine " safety Brigades " and the regional newspaper " MNS- info". Post Chernobyl disaster due to the direct participation has always been close to him and so willing to share their experiences.

The lecture dealt with the crash which took place 26 April 1986 in a nuclear reactor power unit No. 4 at the Chernobyl nuclear power plant . In which due to overheating of the reactor hydrogen explosion occurred , fire, and spread of radioactive substances . Colonel shared with many listeners gathered their thoughts , memories and lessons learned after the disaster . It was the largest in the history of nuclear power industrial disaster of the twentieth century . Following the accident radioactive contamination has an area of 125,000 km2 to 146,000 area on the border of Belarus, Ukraine and Russia, and emitted from the damaged reactor radioactive cloud spread across Europe . As a result of contamination were evacuated and resettled more than 350 000 people. Crowds gathered CS PSP personnel , cadets and students attentively listened to a lecture at the end of rewarding him with thunderous applause .

During the training of rescuers from Ukraine met with :

- Colonel Lord . Stanislaw Słyżem - Head of the Department of Emergency Management , Civil Protection and Defence of the City of Częstochowa.