Training firefighters from Moldova round I 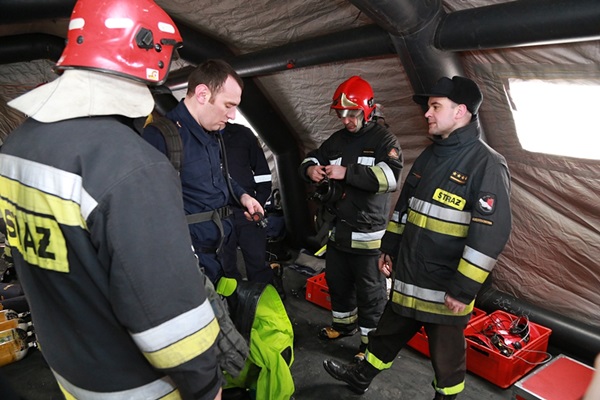 The Central School of the State Fire Service is launching a project Fri " Identification and elimination of hazards during fires , chemical and technical rescue - training for firefighters from Moldova " . The project is implemented under the Multi-Year Programme of Development Cooperation for the years 2012 - 2015 , implemented by the Ministry of Foreign Affairs.

The project will be implemented modularly , in each of the two modules will be trained 10 representatives of the Moldovan firefighters . Trainees will be selected by the Service of Civil Protection and Emergency Situations of the Ministry of Internal Affairs of the Republic of Moldova . Training will be held from 24 September to 5 October 2012 and from 18 to 29 March 2013.

In the period from 24 September to 5 October 2012. Central School PSP implemented training for 10 representatives of the Fire Brigade of Moldova.

St . Brig. MSc. Marek Chmiel Commander of the Central School of the State Fire Service in Czestochowa has consistently pursued close cooperation with foreign firefighters , among others, from Moldova , Ukraine, Georgia , Belarus, England, Scotland , Ireland, Germany , the Czech Republic and Slovakia. With such a joint workshop continually raised the level of training activities in the rapidly growing school of Czestochowa .

The training at the Central School in Czestochowa PSP was implemented under the project : " IDENTIFY and LIQUIDATION HAZARD in TIME FIRES , and TECHNICAL CHEMICAL RESCUE " and was one of the elements of a multi-annual development cooperation program for the period 2012 - 2015 Ministry of Foreign Affairs and the Ministry of Internal Affairs .

The project rescuers from Moldova have been trained in the recognition and elimination of hazards in the chemical and technical rescue . The selection of subjects was determined on the basis of common agreement between the Parties . Classes were conducted on the military school in modern classrooms and laboratories and laboratories for practical CS PSP staff and external experts . Joint exercises of our guests from Moldova with the cast of the school and Rescue Units - Fire Fighting been a great field to exchange experiences, and also offer an opportunity for comparison of emergency procedures in both countries .

During the workshop firefighters from Polish and Moldova could share their insights on the differences in the rescue in their countries.

Training carried out at the Central School PSP, contributed to the increase in the competence of public services Moldova , and thus will improve the efficiency of tasks , improving safety and the environment.

The project is a continuation launched in 2010 for cooperation in the framework of the trained rescuers inter alia, in Ukraine and Georgia in the field of technical rescue . Training in the current year are addressed to rescuers from Ukraine , Moldova.

- Rescue the construction cases , the search for missing persons

- Legal basis of the chemical and environmental rescue in Poland

- Protection of the environment after the action ,

- Distribution of extinguishing agents and their effects. Quick -fighting equipment ,

- Application of medical equipment in fire and rescue operations .

The project " Polish Aid 2012" , which implements the Central School of PSP with the help of the Ministry of Foreign Affairs and the Ministry of Home Affairs, is not just training . It is also hardware support . Rescuers from Moldova to return to their country with the likes of :

Participants of the training course in addition to CS PSP had the opportunity to familiarize themselves with the operation of HP PSP Mining oak wood .

As part of the cultural program prepared trip and visit to Kraków, as well as the Monastery of Jasna Gora in Czestochowa. Our guests also visited the Auschwitz- Birkenau .

During the ceremony at the end of training Commandant of the Central School of the State Fire Service in Czestochowa City of Brig. MSc. Marek Chmiel , along with Colonel Vladimir Valerim CERGE - commander of the firefighters delegation from Moldova declared their desire and need for further cooperation.

His training was honored by the presence of , among others, :

- Mrs. Anita Kołodyńska - representative of the Office of International Cooperation Headquarters of the State Fire Service,

- At the end of the firemen were also present from Ternopil in Ukraine together with the City of Brig. Vinicius Jarczykiem of SFS Katowice, who was a patron of the group.