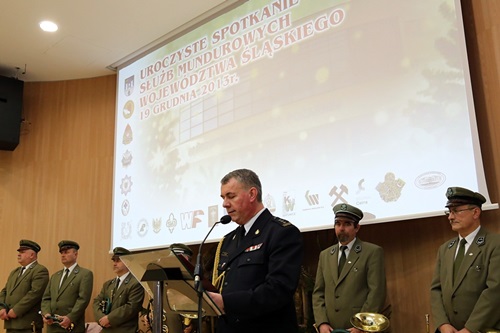 On 19 December 2013 a solemn meeting of the Uniformed Services of Silesian Voivodeship was held. The hosts of the ceremony were the Jasna Góra Sanctuary of Black Madonna of Częstochowa and the Central School of the State Fire Service in Częstochowa.
These are dedicated people who cherish the service, said Silesia Province Governor Zygmunt Łukaszczyk about the uniformed services during the Christmas and New Year's meeting in Częstochowa. For the sixth time, on the initiative of the Silesia Province Governor, police officers, firefighters, soldiers, border guards, prison officers, customs chamber officers, representatives of emergency services, special services, members of marksmen’s society, veterans, foresters, miners, chimney sweeps and clergy traditionally shared the holy wafer. 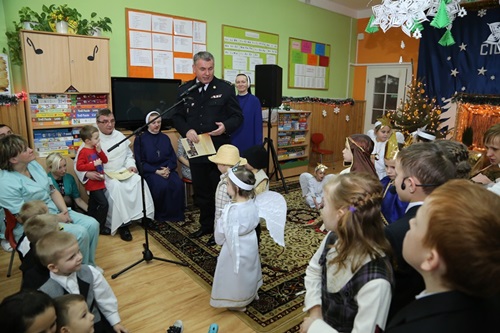 On 20.12.2013 the Commandant of the Central School of the State Fire Service - Senior Brigadier D.Eng. Marek Chmiel was invited by sister Joanna Rękas – the Director of Edmund Bojanowski Home of Early Childhood in Częstochowa to a Christmas Nativity Play performed by pupils aged 3-10 years. The Nativity Play was prepared by carers and sisters.
The ceremony was attended, among others, by: 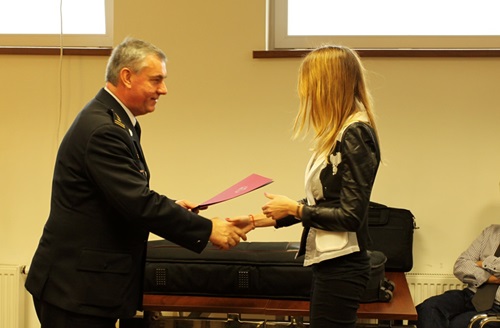 On 29.11.2013 inspectors of fire protection training, organized by the Central School of State Fire Service in Częstochowa, was completed.
Certificates of fire protection inspector gave trainees st. bryg. dr eng. Marek Chmiel. The course involved people from across the Poland.
The course started 04.11.2013. During the course, students have a two-week break, which is used for writing a research work and self-education. 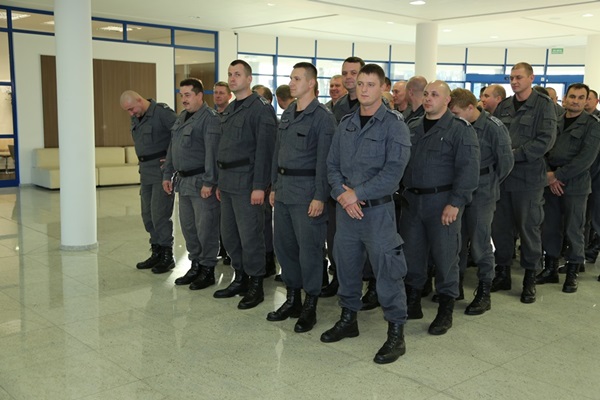 A fire safety officer training for employees of the Prison Service was conducted at the Central School of the State Fire Service in Częstochowa.The course took place on 10.14.2013 - 31.10.2013 and ended with an exam. During two meetings the participants learned about fire safety issues. During the closing ceremony of the training, Brig. MSc. Robert Łazaj handed the training graduates certificates entitling them to perform duties of fire safety officers. The Training Centre of the Prison Service in Kalisz was represented by Lt. Łukasz Wysokiński. The training was funded by the Norwegian Financial Mechanism 2009-2014.

Training in chemical and ecological rescue at CS SFS 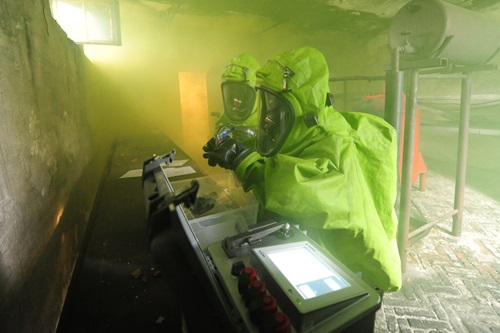 On 31.10.2013 a training in chemical and ecological rescue, organized by the Central School of the State Fire Service in Częstochowa, was completed. Fifteen people delegated by the uniformed services and the fire service completed the training course. The classes were conducted by the Central School teachers and the specialist from the chemical rescue unit in Katowice - Piotrowice. The practical exercises were held on the training ground and in school laboratories whereas theoretical classes were carried out in the lecture rooms.